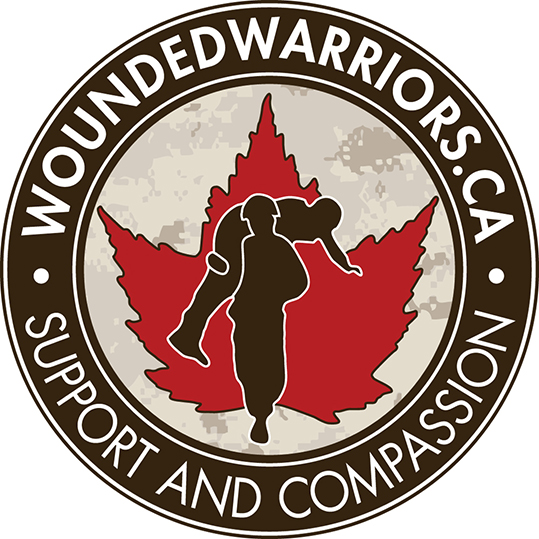 To read about Margaret’s first three days of the ride, click here.

No bus today! Today brought a change of mindset. I decided this was going to be the day that I would ride the entire ride. It was here that attitude brought success. So much so that I was cruising downhill and missed the turn and rode an extra 12km!  An angel followed me and we were 6km in when we had to turn back. Oy vey! We managed to find our way back as the bus came to find us. 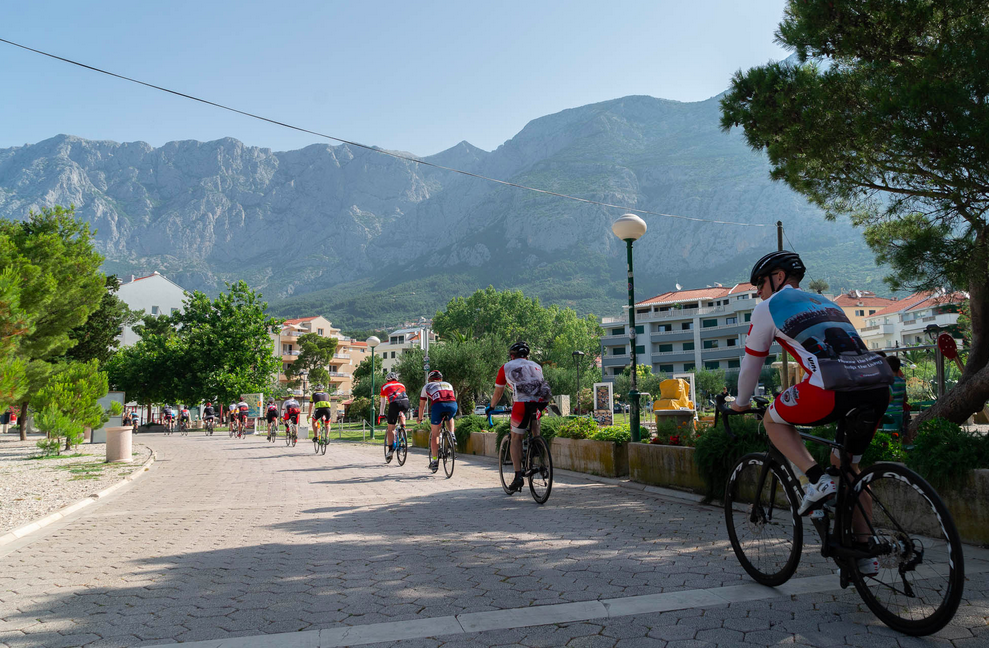 It poured on the final downhill into a crevice of a mountain, which made it slick. Then we had to climb up a steep 200m climb for over 2km. We tried hard, but we could not make it up all the way, so we took the bus until the top, then rode the last 5km to the gorgeous hotel with lavender everywhere and a pool.  Surrounded by stunning vistas, we stayed in the wine hotel (appropriately named).  Great night, fabulous day!  In life, mindset is 90 percent! 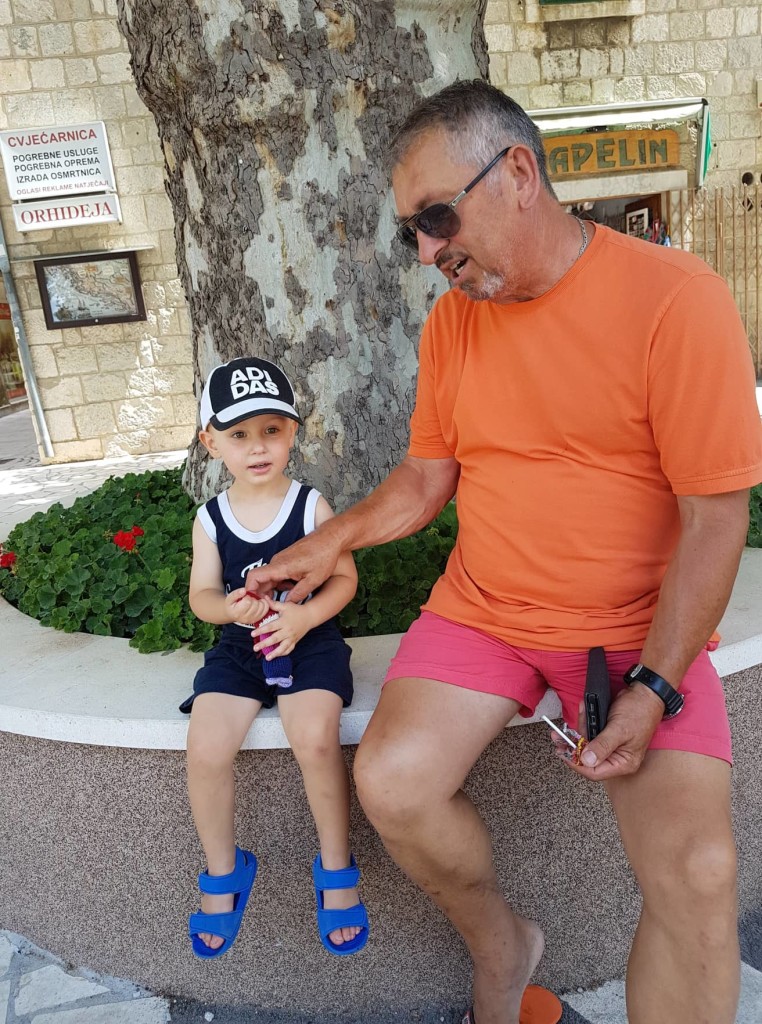 It was in Kastel Lučick that I gave out my Izzy Doll.  One rider brought 200 Izzy dolls for each of us to bring joy to a child in this war torn area.  The Izzy Doll is named in memory of a Canadian soldier by the name of Cpl Mark Isfeld who was killed on a peacekeeping mission on June 20, 1994 in Croatia. One of the riders gave his doll to a child whose mother later researched the foundation and wrote him a personalized thank you note via his Facebook account. Izzy dolls brought laughter and joy to many children along the route. 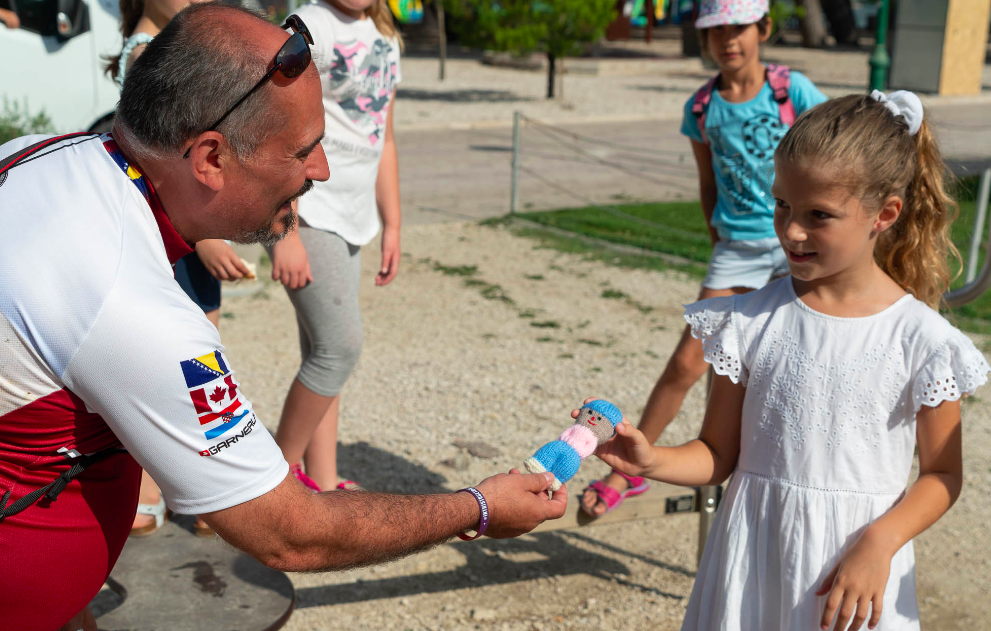 A stunning day!  Great ride, no bus this day! I was starting to get the hang of it…and I was absolutely loving this tribe.  I had breakfast with two of the veterans who were at Medak Pocket. One person was riding with three names on his bike of fellow soldiers whose PTSD took their lives—he saw human atrocities and homes riddled with bullets. I bought him a frosty, non-alcoholic beverage at the end of this day to thank him for his service. It wasn’t much, but it was something… 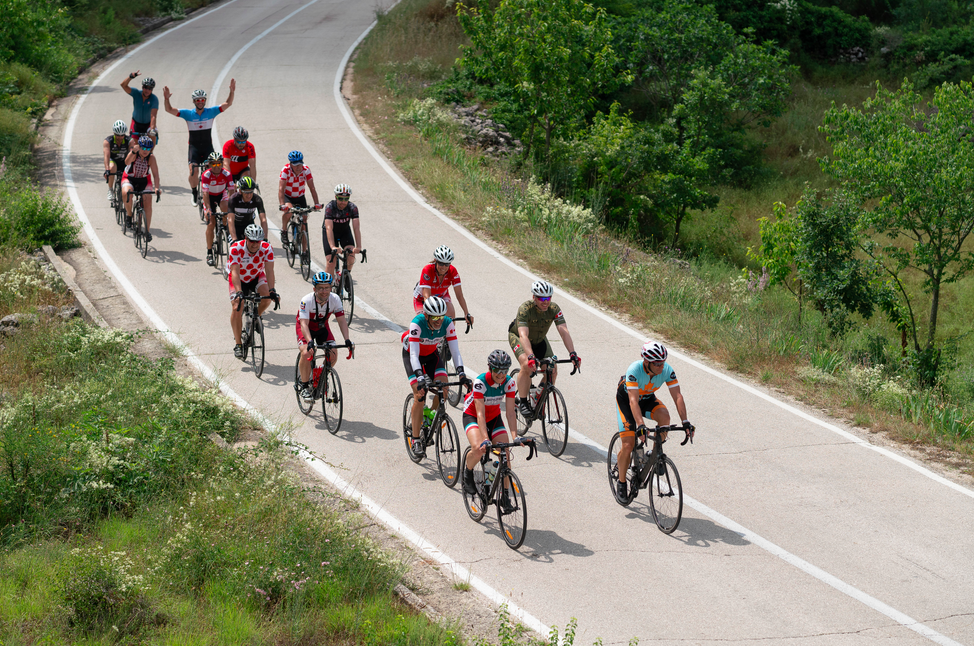 Today was the day that we drove through the village of Medak, which is described as “eerily quiet” because it remains empty from the devastation caused by the war.  Abandoned homes with no roofs and with bullet holes. What an emotional day! 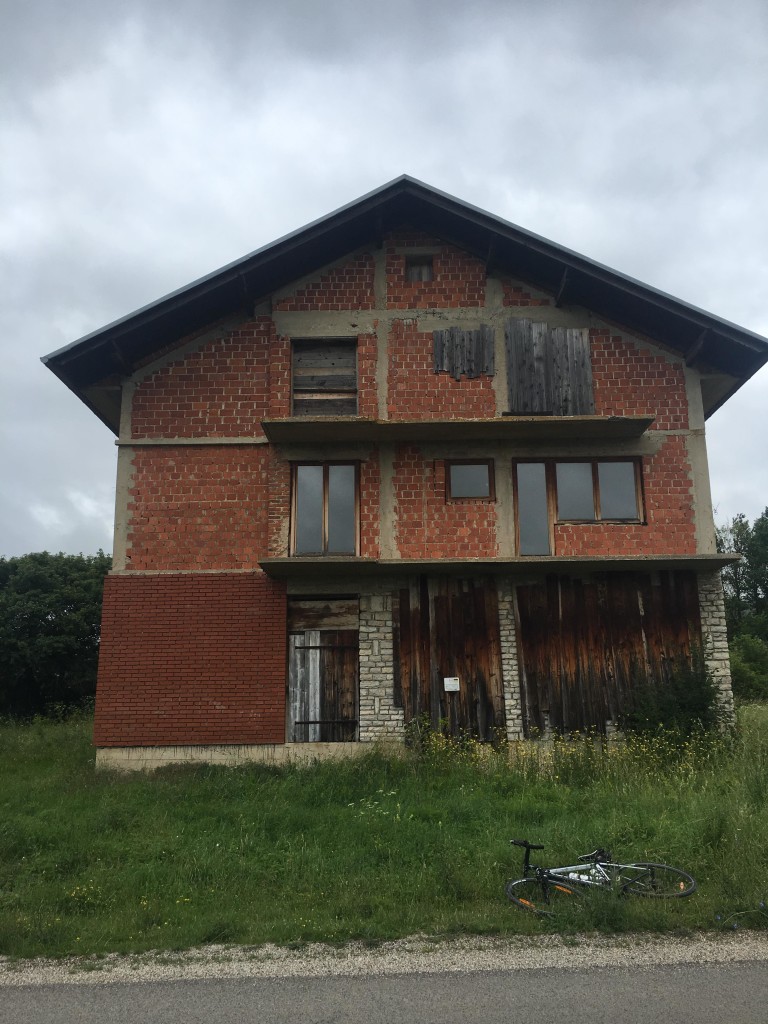 Pictured here is a home that was tagged #276—there was also a Canadian Flag on the silver plate. This was the tag used when a family would have their home rebuilt in order to stay and keep the community growing. This house, although it had been tagged and the windows were repaired, was abandoned despite the reparations. Taken by Tariq Gordon a member of the Canadian Ambassador to Croatia team who rode alongside us.

The day started with a veteran medic sharing his journey  of what he saw 25 years ago while in the towns that we would be riding through that day. He arrived for his mission to a town, and even the dogs and cats lay lifeless covered in blood.  His job was to tag the bodies, and he shared with us a very personal story about seeing two women who had been tied with chicken wire and burned with gasoline. Oh the human atrocities…Let me pause for a moment….

He also spoke about his struggle with PTSD and how it affected his family.  He shared how it was through programs from Wounded Warriors Canada that saved his life.

After the sharing, the slower team (we were affectionately called Jimmy’s Jackasses after our fearless leader—that is a story for another time that I will share in the online presentation on August 29) boarded a bus to bring us 30km into the ride. Winds were high, more than 60km per hour (folks actually had to pedal downhill!).  Climbing the hills with 60km winds beside the trucks had me weaving in and out of traffic, not in a good way. So I took the bus most of the way this day and only rode about 40km. Not a proud moment, but it turns out that I was where I was meant to be.  It was here that I learned of a medic who feared the dirt roads, and shared with me her story of being in the truck while the other soldiers would find and disarm bombs.  She would wait in the truck until she was needed. One day, she was needed and, for some reason, she decided to get out the driver side of the truck. Thank God she did because the passenger side had a mine that would have killed her.  She has that piece of the mine on her mantle.  She was twenty-five years old, seeing atrocities…I’ve said it many times and I’ll shout it again: Our CAF, reservists, veterans, and first responders are heroes. Thank you thank you for your service. 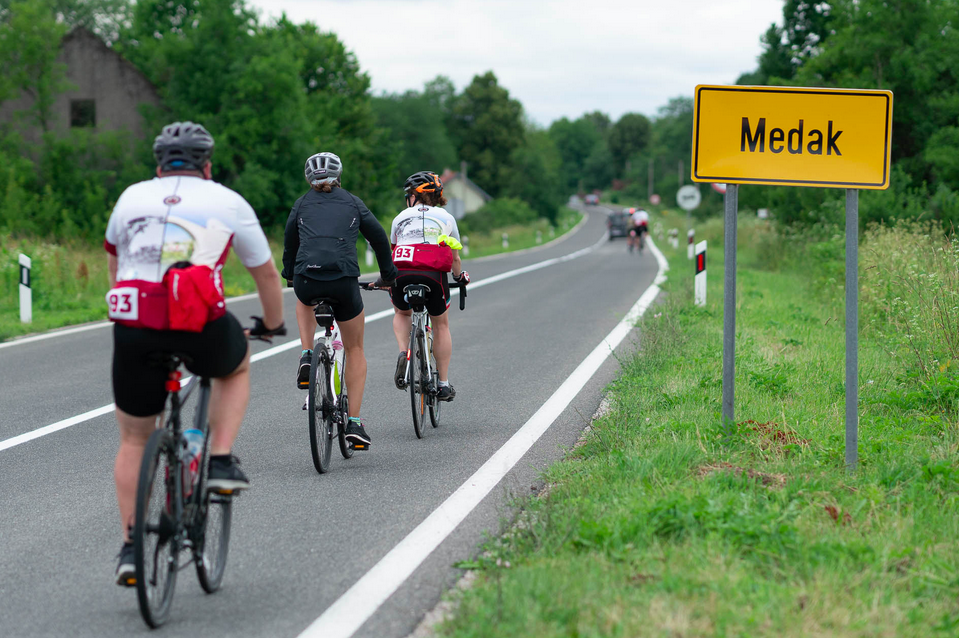 At the Medak Pocket monument, we had a ceremony and a veteran spoke.  His honesty of sharing a part of his story was so moving.  This was his first time back and it was extremely emotional for him to share a small part of his journey of his years of service and how this ride particularly affected him.  Twenty five years ago, his role was to tag and identify bodies. He is one of the many heroes that we met on this ride. 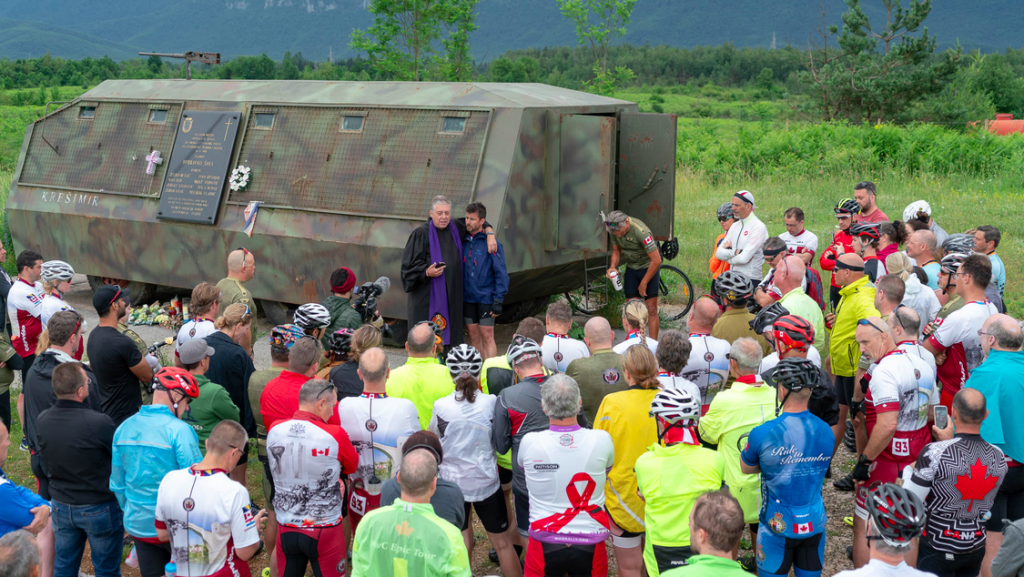 We were police escorted into town for the last 15 km of the ride… powerful team!

I highly encourage those of you who are able to, to experience a Wounded Warriors Canada Battlefield Bike Ride at least once in your lives. It changes you. This ride made me appreciate all that we have. I am so thankful for our freedom.   Please, take a moment to thank a veteran, reservist, CAf member, or first responder today.

Here is a picture of the place where our Canadians would report to duty. Still standing filled with bullet holes.

This was a beautiful ride—nice uphills, great downhills. It was cool enough for a jacket and poured rain as we rode into the stunningly beautiful Ptilivic Lakes National Park.  As I was riding the last 11km in the pouring rain, my thoughts went to this adventure and the people that I met. I felt an overwhelming amount of thankfulness—for the CAF, reservists, veterans and first responders who continue to make Canada proud by keeping us safe and addressing humanitarian crises.  I actually said a prayer for angels to surround the people in our world who are struggling with mental health to give them courage to reach out for help.I am so thankful that Wounded Warriors Canada is a world-renowned organization that saves lives every day with programs for members and their families.

As I rode, I thought of the stories shared. I thought of my twenty-one-year-old son. I thought of the people and the Wounded Warrior service dogs that I met who have forever changed my life. I felt the power of love.  Day 7 ended with wrapping my bike for air travel and a lovely evening gala.  The trumpeter played us out.

Throughout Battlefield Bike Ride 2018 Medak Pocket, I had the honour to ride alongside 30 veterans who were deployed there 25 years ago. Do you know what? Back then they came back and there were no supports, no recognition, nothing to help them decipher the work they did. We must never forget, we must always support our Canadian Armed Forces, reservists, veterans, first responders, and their families. 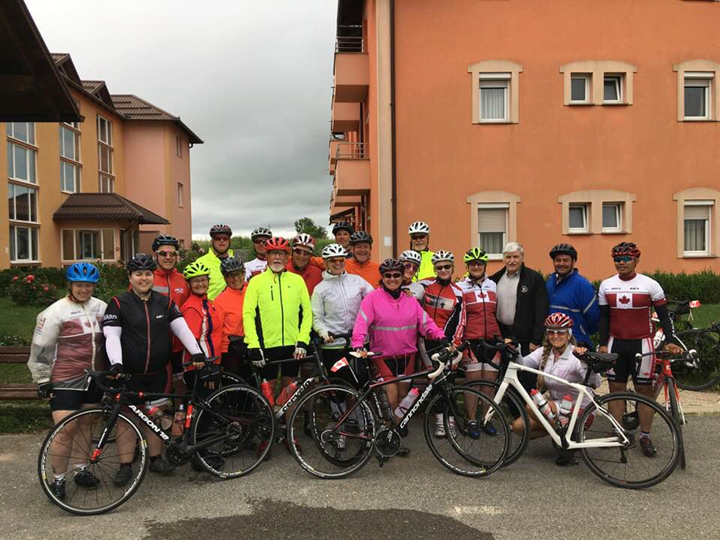 “Personally, I felt at home on the WW1 and WW2 Battlefields of Europe describing history and visiting the sites. This ride, although absolutely amazing, stretched my personal ability to juggle the many “back end” tasks away from the riders’ experience. Wade’s words after Medak were a real highlight for me along with the smile on your face reporting new top speeds! Behind the scenes, the presence of the Ambassador and his team had us meeting with veterans and local/national government officials in both countries mostly to the wee hours of every morning every night. On the Monday following the ride, we held a bilateral best practices meeting with the Croatian senior government officials in Zabreb. “ 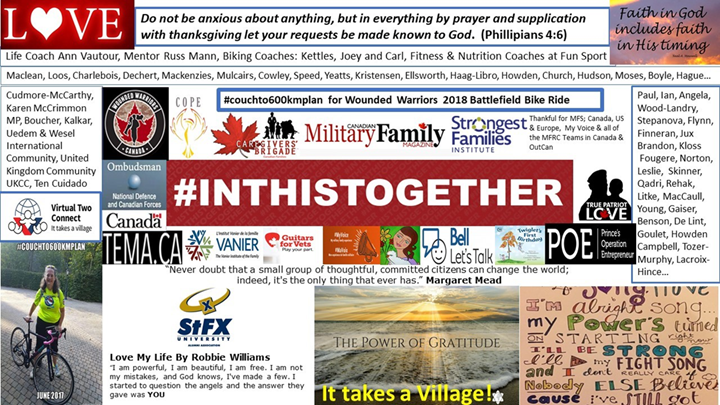 I brought this card with me so that my entire community would ride alongside.

Thank you to Cervélo Cycle, who are auctioning off ten, 0ne-of-a-kind,  bicycles with the proceeds going to Wounded Warriors Canada through their Peace on Two Wheels initiative.

Thank you Wounded Warriors Canada for saving lives and making significant and positive difference in the lives of so many with your programs like COPE, Wounded Warriors Service Dogs, and partnerships with organizations like TEMA.

And thank you to PEI MFRC team for asking me to share this story.  The initial 700-word post grew (just a tad!) and your patience with the many edits was so appreciated as I tried to share a tiny bit of this journey…just one of the more than 100 different perspectives to this journey.

So to close, #couchto600kmplan was not only about my resiliency or anything that I did, it was about honouring the Fallen and helping the living.  I hope to see you at Battlefield Bike 2019 where we will be travelling to the DDay 75th anniversary ceremony.

It takes a village!  #inthistogether

Thank you, Margaret, for sharing your amazing experiences with us. I’m sure some of us are now inspired to check out the Battlefield Bike via Wounded Warriors! Thank you, too, for highlighting the wonderful work Wounded Warriors does for our military and veteran communities. It takes a village, indeed.

To read more about the Battlefield Bike Ride, click here.